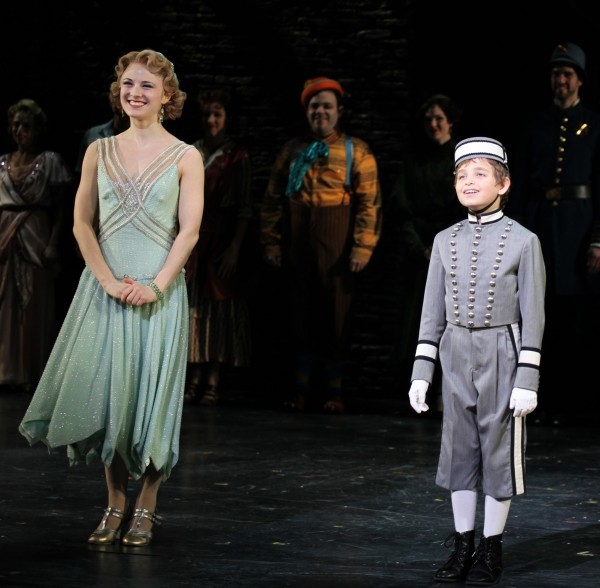 New York City’s acclaimed Children’s Acting Academy (CAA), which made world headlines in September 2010 when four of its student actors were invited to participate as the United States representatives in the first ever international children’s theatre exchange in London, England, is proud to announce more major successes by members of its student body.

This past November in New York, 10-year-old CAA student Oona Laurence was introduced as one of the four young actresses who will share the starring role in Matilda the Musical on Broadway in the Spring; Ethan Khusidman, also 10, recently made his Broadway musical debut in Chaplin, as an Ensemble player and understudy for the young Charlie Chaplin; Ethan Major, 11, who has been a private coaching student at CAA for the past three years, recently completed the national tour of Billy Elliot; nine year old Ness Krell, who has been studying with CAA since 2009, has a role in a new John Turturro movie with Woody Allen, Sharon Stone and Sophia Vergara; and Elle Winter, appearing on Radio Disney’s Next Big Thing, finished as the first runner-up in the Final Round of the nationally televised competition.

Oona Laurence, one of the four young actresses cast to rotate in the starring role as the precocious lead when the Royal Shakespeare production of Matilda The Musical makes its New York debut at the Shubert Theater in April, is duly excited by the prospect of making her Broadway debut in the musical based on Roald Dahl‘s 1988 book about a girl who unleashes her magical powers on nasty parents and an evil headmistress. “It sounds like a lot of fun,” says the young thespian.

A native New Yorker, Oona started acting at the age of five as the lead in her Dad’s experimental film Days Dance. Since then she has played leads in numerous Columbia University graduate films, and last summer was voted “Best Performer” by the audiences of The Turtle Shell’s Summer Play Festival for her Philosophical Banana in The Cosmic Fruit Bowl. An awesome jazz, hip-hop, ballet and modern dancer, she has studied drama at The Children’s Acting Academy for two years and performed in one of the company’s musical stage productions. Oona and her three rotating co-stars, who will each star in the role twice a week, will have large shoes to fill; all four Matildas in the London production were jointly declared Best Actress at the recent Olivier Awards, the UK’s most prestigious theatre award which rivals Broadway’s Tony Awards.

Ethan Khusidman, a ten-year-old native New Yorker who is currently making his Broadway stage debut in the musical Chaplin at the Barrymore Theater, studied at the Children’s Acting Academy during the 2011-2012 school year. He is a member of the Chaplin ensemble, has a role as the Usher and is the understudy for the young Chaplin and young Jackie Coogan. Ethan made his theatrical debut as Gavroche in the National Tour of the 25th Anniversary Production of Les Miserables. His other credits include (Off Broadway): Harry Finfer/Tommy Mara in the Actors Fund Benefit reading of Miracle on 34th Street: The Musical. He also had roles in the films Dark Was The Night and Making Friends; and made an appearance in TV’s The Whitest Kids U’Know.

Ethan Major, 11, has been taking private coaching instruction at the CAA for the past three years. He was cast as one of the “Michaels” in the national tour of Billy Elliot in July 2012. Born in Texas, Ethan received his early drama training at children’s acting schools in suburban Atlanta.

Ness Krell, 9, has been studying at the CAA since 2009, taking classes and private coaching lessons. She has also appeared in several CAA stage productions, including the musical Seussical Jr. She was recently cast by John Turturro as Little Devorah in his new motion picture, Fading Gigolo, starring Woody Allen, Sharon Stone and Sofia Vergara. Her two older sisters have also studied at the academy.

Elle Winter is a 13 year old singer, composer and recording artist from New York City who studied at the Children’s Acting Academy for two years and has remained as a private coaching student. This past year, Elle headed out to LA to become part of this year’s hottest TV competition series Radio Disney’s Next Best Thing (N.B.T.), a multi- platform competition that focuses the spotlight on aspiring young recording artists and showcases their music across national broadcast and on-line platforms. Over the course of ten weeks, Radio Disney and Disney Channel audiences were invited to look, listen and vote for their favorite artists. Elle was one of the Top Five finalists in the competition and finished as a runner-up. She will be part of the national concert tour being planned for the winner and finalists.

“We are extremely proud of all our students who have gone on to find success in the professional ranks of show business,” says Mimi Stuart, Artistic Director and owner of the acclaimed Children’s Acting Academy, which has three New York branches – one located at 131 West 72nd Street on the Upper West Side of Manhattan, and the other two in Westchester County at Westchester Yoga Arts, 82 Centre Avenue, in New Rochelle and at The Westchester Dance Academy, 350 Lexington Avenue, Mt. Kisco.

The recent string of successes experienced by CAA students is not new to this acclaimed children’s acting school. In September 2010, four talented 12-year old members of the Children’s Acting Company division of the Children’s Acting Academy – Nicholas Cacciola, Jonathan Rockhill, Bella Scarselli and Brooke Strutin — traveled to London, England, as the official representatives of the United States in the first ever international children’s theatre exchange which took place between September 17 – 27, 2010. The event was produced by Theatretrain, a nation-wide British performing arts company for children, and co-presented with the German-based international children’s charity Arts by Children.

A total of 101 children from 26 countries participated in the ten-day London symposium, a high-profile event for young drama students able to speak English. The culmination of this exciting experience took place on September 26, 2010 when the international kids were joined by 1,000 multi-talented children from across the UK, and a live band, on stage at London’s prestigious Royal Albert Hall in a gala musical performance entitled Voices for a Better World.

“This was a completely unexpected opportunity that came out of the blue,” Mimi Stuart recalls.”We had no idea that our school was even being considered for this prestigious honor. Apparently, the organizers had one of their US representatives check out children’s theatre schools across America and recommended our school. We were excited by being selected and were extremely proud of the four youngsters who all had wonderful experiences and performed well in the international arena.”

The Children’s Acing Academy, founded in 1972, was created for talented youngsters who are interested in learning how to act, sing and dance from industry professionals and who wish to build self confidence in their abilities to succeed in life.

The academy utilizes the Stanislavski, Strassberg and Meisner methods to teach acting. Students learn to behave logically and naturally. Concentration and relaxation are emphasized through sensory exercises, scene work and improvisation. Proper speech and voice are emphasized during every class session. While acting and singing classes are done in groups, there are opportunities to receive one-on-one instruction.

Acting classes feature instruction, observation and performance taught by professionals working on Broadway, TV and film. The students also experience the business of show business by meeting with agents and personal managers, touring TV studios and working on auditioning with theatre veterans.

Disney’s Cinderella, which will be performed by the youngest company members on Sunday, January 13, 2013 at 11 AM, 1 PM and 3 PM at the Leonard Nimoy Thalia at Symphony Space, 2537 Broadway, at 95th Street. The show is under one hour and is appropriate for all age groups. Tickets are $20 and may be purchased at the Box Office on Tuesdays through Sundays between 1 and 6 PM, or by phone at: 212-864-5400, or on-line at www.childrensactingacademy.com.

Willy Wonka, a musical about the most famous, eccentric, whimsical and occasionally sinister candy wizard, will be performed at 7 PM nightly on Friday, Saturday and Sunday, January 25, 26 and 27, plus Friday, Saturday and Sunday, February 1, 2 and 3 at the McGinn/Cazale Theatre, 2162 Broadway (4th Floor). Tickets are $20 at www.iseats.net or www.childrensactingacademy.com.

Also upcoming is a production of Footloose, the 1998 stage musical, which will be presented Thursday, April 4, through Sunday, April 7, at 7 PM at the McGinn/Cazale Theatre. In addition to CAA students, the cast will include professional actors, BFA students, both musical theatre and acting majors, and high school students. Licensed from Rodgers and Hammerstein, Footloose features a book by Dean Pitchford and David Saint, based on the original screenplay by Dean Pitchford. The music and lyrics are by Eric Carmen, Michael Gore, Sammy Hagar, Kenny Loggins, Tom Snow, Jim Steinman, Dean Wolfer and Dean Pitchford.

Mimi StuArt Started teaching and directing at the Academy in 2000 and became its Artistic Director and owner shortly thereafter. She has been acting and entertaining audiences since she was ten years old and professionally since she was 15. Recently featured in a Fuji —Medical industrial film, she has performed Off Broadway as a lead in The Mandela and Guilty Innocence, and has performed in summer stock as Dolly Levi in The Matchmaker as well as in other leading roles. She has toured the US and Canada in such musicals as My Fair Lady, Godspell, Cinderella and Pajama Game. And has appeared on daytime TV in All My Children and on primetime television as the lead in Ghost Stories. Mimi has appeared in more than 20 feature films and has done voice-overs for numerous commercials and industrial films.

Mimi has much experience working with child actors, having served as Artistic Director at Saginaw Overnight Camp, directing two shows a summer and teaching drama and improv classes. She has taught acting at Kean University and voice and speech at NYU and Weist-Barron. She was the originator of The Children and Teen Musical Theatre, and Voice and Speech Program at HB Studio. For the past three years, she has taught a Directing Children on Film class as part of the MSA film program at Columbia University.

For more information about The Children’s Acting Academy and its programs, call 212/860-7101, or visit www.childrensactingacademy.com.